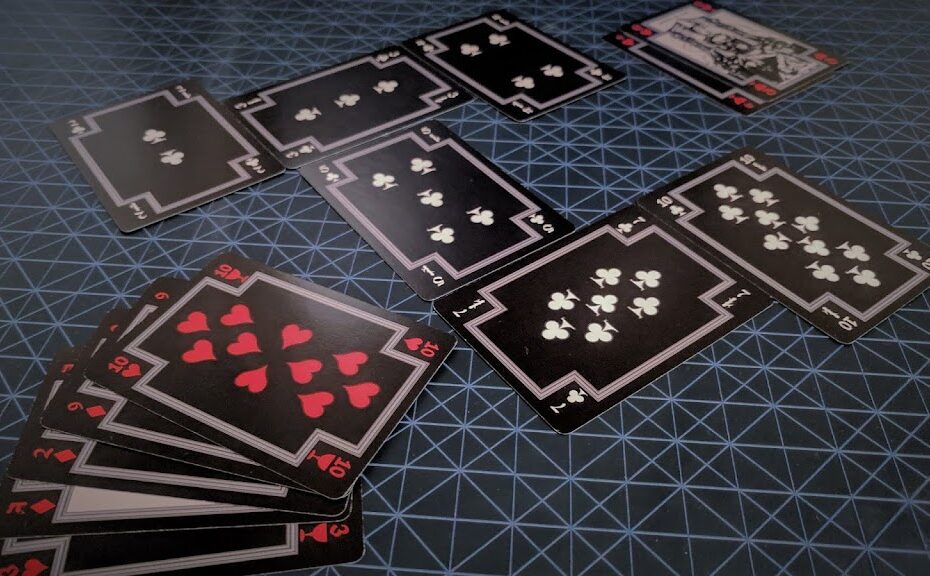 For the past year I’ve been toying with ideas for using decks of cards in RPGs, but none of them have ended up condensing into anything usable. That is until this years One Page Dungeon Contest roused me into putting my ideas into action!

The Forgotten Abbey aims to provide a GM with a simple procedure for tracking four core components to a good dungeon delve; the map, random encounters, treasure and time.

The idea is to use the physical properties of the cards to track these elements mechanically. The club cards can be laid out on the table to map the rooms. Discarding the spades keeps track of what monsters have already been dealt with. A hand of hearts and diamonds that the players pick from at random simulates rummaging amongst the ruins, revealing treasures or simply wasting time.

To ensure the time wasted has consequences, the dungeon itself reshuffles if the players dawdle for too long. This has an additional benefit of providing the players with a difficult choice. The deeper they go into the abbey, the more treasure they may find, but the more likely it is that the dungeon resets and the dangers they faced on the way in ressurect.

It has a couple other cool things going for it I hope! The dungeon is broken into three levels, each getting progressively more spooky, dangerous and lucrative. I think the magic items are pretty neat, if nothing else!

This this was a layout challenge for me, having a lot of idea and very little space! I’m trying to get better at it, but i’m pretty happy with the final result. The page is busy, but the intent is that all the information is just there, and hopefully it’s clear where to look for the bits you need as you need them. Feedback from better minds that mine is always appreciated!

I feel like this system might lay the groundwork for a dungeon delving card system. I’m keen to experiment with this idea on another dungeon and see if it works outside of this specific theme.

As mentioned above, I have entered this into this year’s One Page Dungeon Contest. The contest is still open until Midnight on the 1st of May, so get writing and you can still get that entry in the door!

Otherwise keep an eye on their site or Twitter for when they release all the entries into a compilation, it always produces a mountain of fantastic material for your game!

P.S. I’m trying to become more active on Twitter following the death of G+. I have even written a little bot that tweets out the latest blog posts from across the OSR blogosphere if that sounds useful!