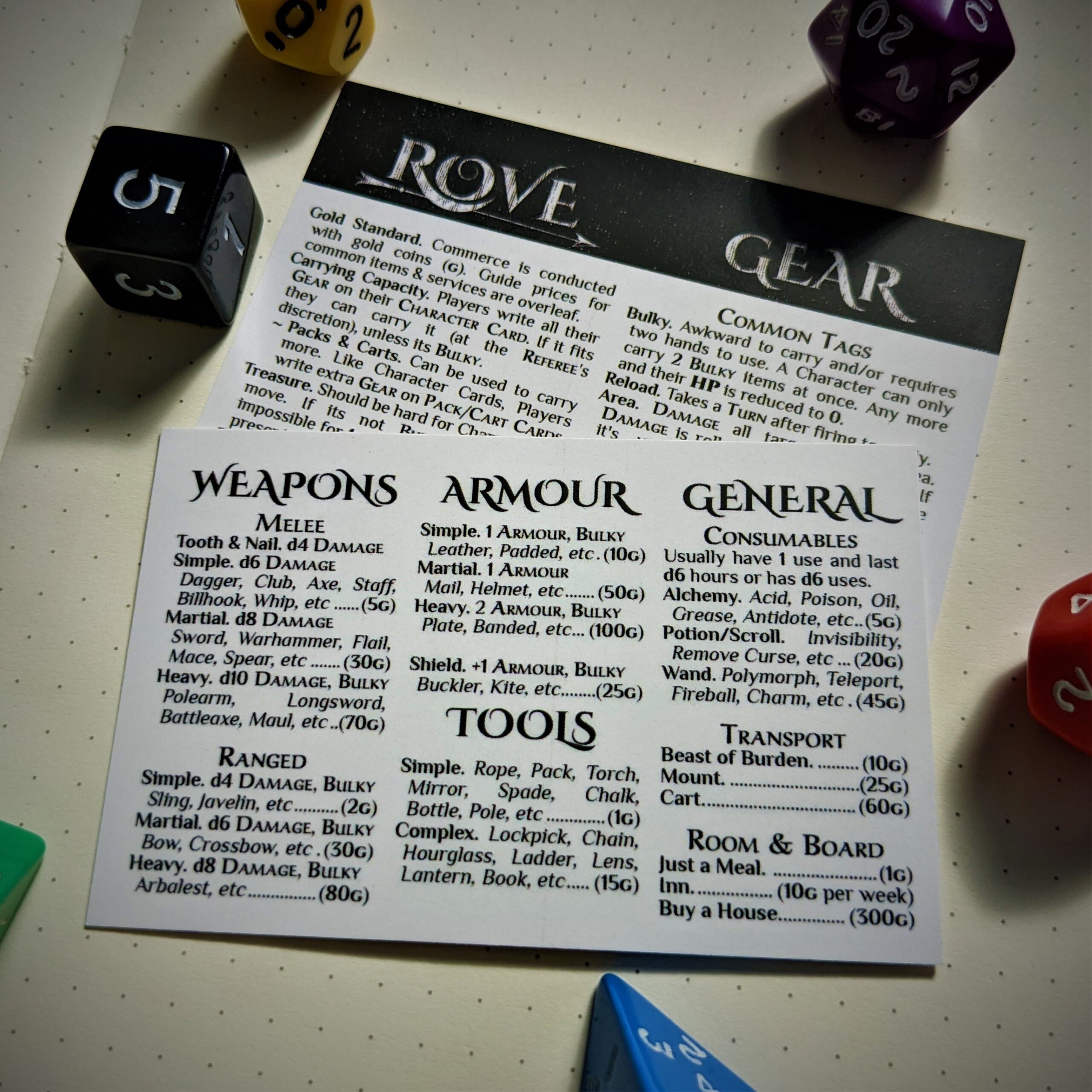 Of the indie “OSR” TTRPGs i have come across in my time in this scene, I feel like one of the main areas of innovation has been in equipment and encumbrance.

The Black Hack has a number of items equal to your Strength score, Into the Odd has Bulky items, Knave has slots, etc. Tracking individual pounds and ounces, while “immersive” in theory, is a huge pain to actually do. What these games figured out is that to have fun, tracking inventory needs to be simple and intuitive, otherwise players will basically ignore it.

But “Simple and Intuitive” can also be a bit boring, another way to lose player attention and cause them to ignore/forget the rules. Whenever i think about making encumbrance fun, I always think to Logan Knight’s fantastic “arts & crafts” solution.

Logan’s work here was a big inspiration for Rove in general. I want lots of things to play with. I want to take advantage of the physicality of playing with business card sized things at the table.

With that comes the first rule for this new card:

Carrying Capacity. Players write all their Gear on their Character Card. If it fits they can carry it (at the Referee’s discretion), unless it’s Bulky.

Simple and straightforward. This utilises the physical limitation of the Character Card itself. I have kept the Bulky rule from ItO, its elegant and enables the Referee to give the players some engaging decisions when given too many big things to carry.

Then, we take a bit of a tangent.

The cart is inspired by the Caravan sheet from Luka Rejec’s UVG. A shared resource for all the players to manage. Making them printable paper items gives the Referee even more opportunities for mischievous fun! I love the idea of a player losing their backpack and getting to tear it up at the table, or keeping hold of a lost cart and presenting it back to the party dramatically when they recover it.

This is the kind of unique direction I think Rove can take that other RPGs can’t. Put a pin here, we will return to this idea in later cards I am sure.

The rest of the Gear card is fairly straightforward. Rove uses a simple gold standard:

I toyed with using Gold to silver to copper or similar like I have seen in many other ItO style games but I always find coin counting like that busy work generally, and only adds to confusion. One number to keep track of money is simple. A bunch of coins is a fun challenge to present the players but this system does;t stop that necessarily, just puts in on the Referee to do the economics.

I have a little advice on how to utilise treasure:

Treasure. Should be hard for Characters to move. If its not Bulky, or outright impossible for 1 person to move, it should present some other logistical challenge.

Another rule coalesced from the incredible advice from Electric Bastionland.

The rest of this side of the card has some common tags I like to add to gear, as well as the main place where the Bulky rule will be:

Bulky. Awkward to carry and/or requires two hands to use. A Character can only carry 2 Bulky items at once. Any more and their HP is reduced to 0.

Reload. Takes a Turn after firing to ready.

Area. Damage all targets in an area. Damage is rolled separately for each. If it’s unclear how many targets are affected, roll the weapon’s Damage dice to determine the number.

Bleed. After causing Damage, victim takes 1 Damage per Turn until they Rest.

Vorpal. Cause immediate Death at 0 HP.

Then the entire rest of the card is example gear, like that found in ItO books.

The biggest challenge on this card was the balancing of prices. I think I have done an okay job but I would treat these prices as guidelines rather than hard rules. I have certainly erred more on the side of making things too expensive rather than cheap. I really dislike that in most games, my money only really matters when gaining XP or buying absurdly expensive things like magic items. I want to provide some degree of choice and characters “saving up” for better gear.

I also categorised things in a way that is somewhat consistent between armour and weapons. I have seen this in a couple of other ItO Hacks. 3 Categories, Simple, Martial and Heavy. I think this helps when coming up with gear for NPCs or new Characters to know the numbers/tags of the items they have, you just have to add flavour.

I think this list is fairly comprehensive to 99% of mundane items your likely to encounter in Rove. I want to leave it open to creating unique and more interesting gear in future modules.

On that note, I do have some exciting  ideas in the works…

Just a tease, but I’m excited to see where I can take this project!

That’s all for this month. Checkout my Patreon for access to the Print files for Gear and the other cards.